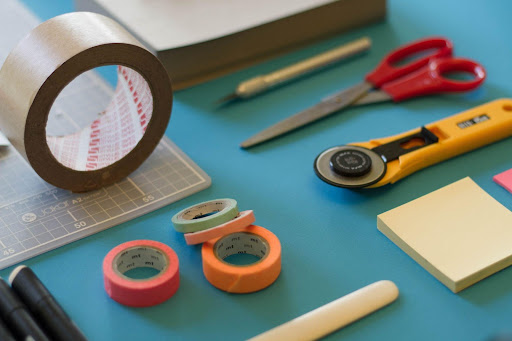 Since the surgical tape was invented in 1845 by Dr. Horace Day, different types of tape have kept coming. There are even tapes you never heard of, such as Elastic Therapeutic tape, Gecko tape, Hockey tape, etc.

Are you confused about which tapes you would need? Here are 12 tapes that will serve your every need.

An essential tape that you need to keep in your toolbox is electrical tape. It is used to insulate electrical wiring so that any fatal accidents like fire don’t occur. It is cost-effective and small in size and doesn’t take up much space in the toolbox.

Usually, vinyl is used to get the flexibility and resilience of the tape. They also come in many colors; you can color code the wires if you want!

If you are a painter or an architect, you have definitely used masking tape. These are usually used to get a clean, straight line after painting. They come in tan or beige, although blue is commonly used in construction.

As masking tapes are made of paper, they are easily tearable. It also doesn’t damage the surface because of having a weak adhesive. It can also be used to write notes.

Many people love repairing around the house with duct tape. Why? Because it’s a strong adhesive tape that practically sticks to everything.

Duct tapes are usually grey colored, but now different types can be found. It is made of fabric mesh with polythene coating, making it waterproof, flexible, and more resilient. It can be ripped using hands, though, unlike polypropylene tapes.

Floor marking tapes are strong, heavy-duty tapes. They are used to mark directions, make awareness of danger, divide floors, etc. It’s easier and more efficient than painting. It can be seen in the dark because it’s fluorescent.

Yes! From the name, you can guess the tape properties. Both sides of the tape can adhere to anything. It will help stick two different items together, and if you use it correctly, the tape won’t be visible either. It is best for people who don’t want the tape to be visible, and it’s also perfect for crafting.

Gaffer tape is made of cotton cloth material, making it easier to use, just like duct tape. It shares some similarities with duct tape, but its matte-black look gives it its purpose. It’s used in films, theaters, and photography to secure cables, fix equipment, or show layout because it doesn’t reflect light like other tapes. Aside from its iconic matte-black color, it comes in different colors to match any environment. Find more differences between gaffer tape vs duct tape by checking out online reviews if you are confused as to which one you should pick.

You may know it as ”lingerie tape” or “cleavage tape,” they are used for keeping clothing in place when out for a fashion show or just a fun night out.

Fashion tape is the perfect choice if you want your dress to stay in place and avoid any fashion disasters. It won’t damage your delicate fabric, nor will it irritate your skin.

Moving can be hectic; you don’t want it to be more complicated than it is. That’s why packing tape is the best choice.

Packing tape is a 2-inch, powerful adhesive tape made of thin polypropylene sheet, which helps to close cardboard boxes without any problem. Use the tape generously if you are mailing packages or just need more support.

Friction tapes are generally used to avoid any slipping. This helps to prevent any accidental slipping of things. It can be used on floors, table surfaces, or workshop tables.

Friction tapes are made out of rubber material, and sometimes, they have small bumps. It can also be used to insulate cables and electrical wires. You can also wrap it around baseball bat handles, bicycle handles, hockey sticks, or even under your shoes for better grip.

Surgical tapes are commonly used in hospitals, but that doesn’t mean they can’t be used in the house. It helps to hold down the dressing or bandage in place. Although the tape is powerful, it won’t irritate your skin nor cause any allergies. Even the adhesive won’t cause any damage to the skin when you decide to remove it. The best part is that the surgical tape is breathable, allowing the wound to heal properly.

Decorative tapes are sometimes known as “washi tapes.” They are mainly used for projects, artwork, or even holiday decorations.

The tape can easily stick to paper, but it’s not strong enough to adhere to other surfaces. They come in different colors, patterns, and designs.

Last but not least, scotch tape is the most common tape. It can be used to wrap gifts, attach paper, close envelopes, or write on. You will definitely find it lying around somewhere in your house.

It has a variety of colors and types but is relatively reasonable. But, as it doesn’t have a strong adhesive, it’s not versatile, unlike duct tapes. They also won’t go yellow even after being used for a long time.

The list has all types of tapes, and sometimes one is similar to another. But avoid using a similar tape to the actual tape intended to do the work. For example, avoid using friction tapes for cables or wires just because it works; instead, use the electrical tapes created for this purpose!